Today was an AMAZING day. We hiked the Chilkoot Trail. We walked the flat of Dyea and Skagway. We saw photographs and signs painted by my great great grandfather Anton Vogee 120 years ago. It was like understanding a piece of you that seemed to be always missing. In my early 20’s I glimpsed the images that Anton seared onto glass plates and I was mesmerized. They had been donated to the University of Washington and were also help and on display at the Yukon Archives. I had known that he was a photographer but I had NO idea the kinds of images he took. To think that he was right in the middle of one of history’s greatest adventures and he was the one documenting it all. We found ourselves wondering today if he ever though that a decade later his ancestors would be tracing his steps and tracking down his stop and viewing his images in Skagway Alaska. It is astounding to think he survived…packing his massive glass-plate camera thousands of miles through dense forests, icy ridges, and rough and tumble Skagway and Dyea and SURVIVED. How he was not eaten by bears, stricken with frostbite, ran out of town, or murdered for his supplies is beyond us all. But he survived and provided the world with images that will stand the test of time. His images tell the story of the Yukon gold rush with clarity and truth. It is such an amazing gift to be able to trace his footsteps through time. We do not know a lot about him the person…there are no known diaries or records of his personal life. We know where he was and the years he was in those places. My dad remembers some fond stories told by his grandfather about his dad but that is really all we have to go by. I wish these things existed so I could get to know Anton more…the person and man that he was. I think I would have like him very very much. Here are some images I took today from Dyea and the Chilkoot Trail head. 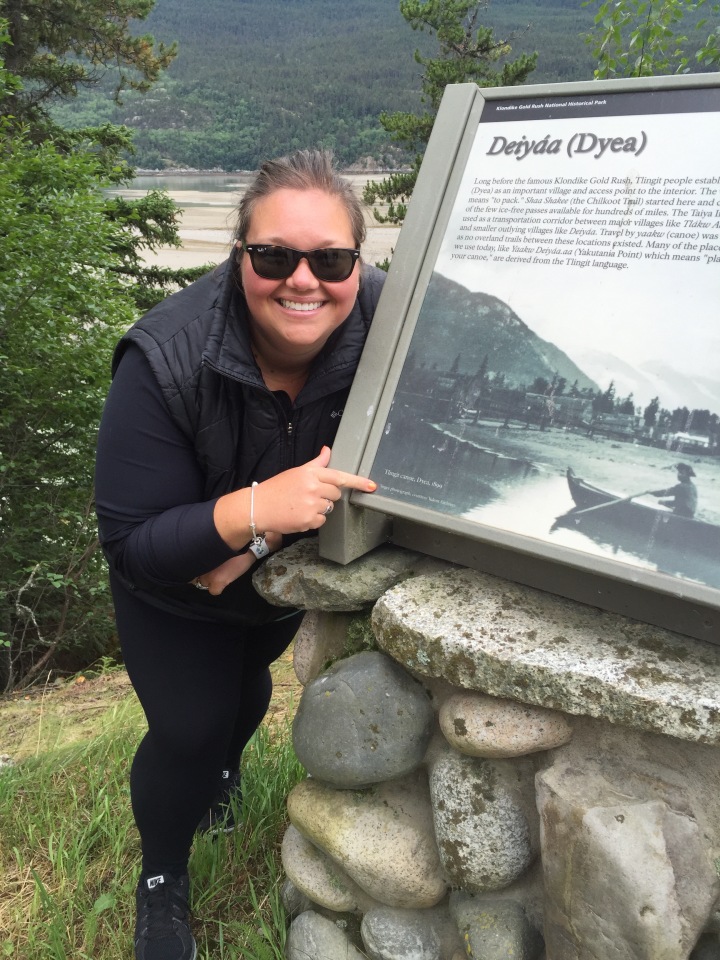 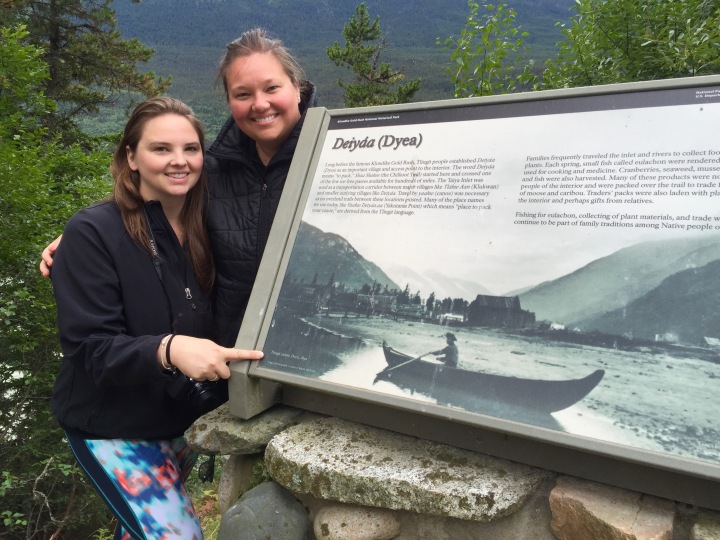 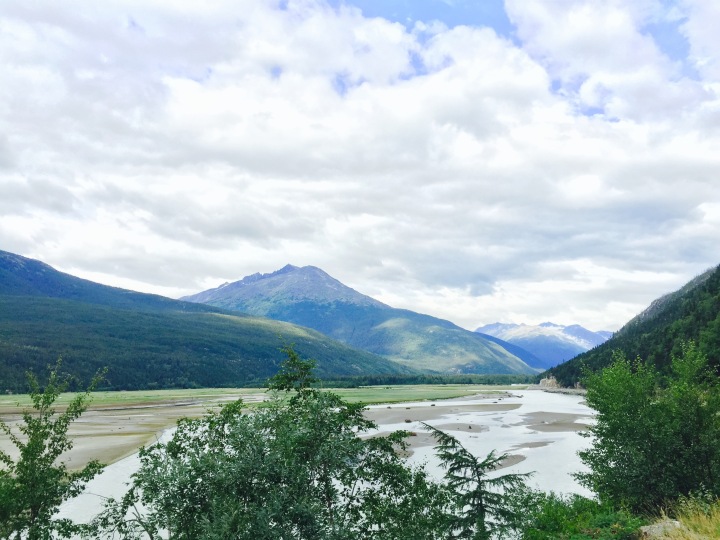 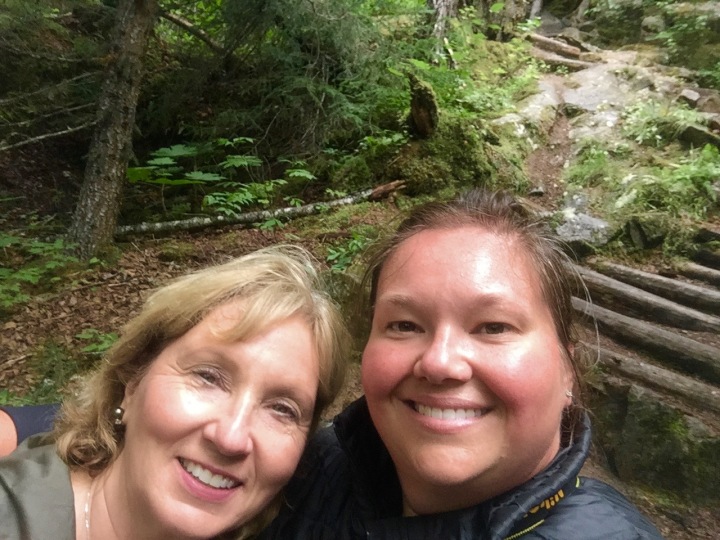 After spending hours stoping around Dyea and the trail head we headed back into Skagway for some light shopping and and old timey show about Soapy Smith, the gangster who controlled Skagway in its prime. He was a Robin Hood type of character who was loved by some and hated by others. He was killed in a shootout and buried without any fan fare but his legend lives on in this town. It was a great show…lots of singing and dancing ladies 🙂 We visited the Gold Rush cemetery which was mysteriously beautiful and took in Lower Reid Falls. The falls were spectacular- full and dark with sediment form the glaciers and ice fields high above. We came back to the Bella and were treated to one of the most glorious sunsets I have ever seen. The seafoam green color of the water reflected perfectly the sky blue and peach colored clouds. It was a perfect day.

I did not do well with my food today. I had my cereal and my shake around 2pm on our way back to Skagway. But this time I was famished and when we sat down to eat I ordered a cheeseburger. It tasted REALLY good…delicious. I was SO hungry. My sister ordered a salad which as soon as it arrived I instantly regretted NOT ordering. Again- the menu and my hunger level screwed me…or I allowed it to screw me. I am finding it very hard to resist foods that I should not be eating. We also passed an ice cream shop that HAD bubblegum ice cream with is my FAVORITE ice cream. That was one of the things I was going to indulge in if I found it up here and sweet Jesus did it taste GOOD. It was hot today…75 and humid which is so out of form for Alaska this time of year. I was hot and sweaty and that ice cream was calling to me.

Being off of your routine makes it difficult to stay on plan. When I was in Silverwood we stayed to a routine…we have a little guy with us and we were more regular. Being in and out of port your routine gets thrown off a bit when new adventures pop up without warning. Do you adventure and throw off your hunger or stick to a stick to an eating schedule? It seems like on this vacation you take the adventure and I would not have it any other way. Seeing the Chilkoot and actually being able to hike a small part of it was a bucket list item for me. It was worth every bite of than hamburger. Tomorrow will be another challenging day; it is Grady’s birthday. My mom has a delicious breakfast planned, dinner out on the agenda, and a Snickerdoodle Cheesecake for dessert to cap of the celebration. We will also be riding the White Pass Yukon Railroad tomorrow…a 4 hour round trip adventure that follows the White Pass taken by gold seekers during the Rush. It is going to be another amazing day that will be off routine and off plan. I think tomorrow I am just not going to worry about anything food wise. We leave Wednesday for Hoonah then Glacier Bay and we will be on board the Bella for 5-6 straight days with one one stop in a port, Bartlett Cove in Glacier Bay National Park…the VERY spot that Grady proposed 5 years ago! I will be able to get back on track those days and be removed from temptations. It is frustrating to know that I have been having an almost impossible time resisting temptations but I am really kinda at a loss. The burger today tasted good but again it was TOO much food. It is 11:35 pm here and I can STILL feel it sitting in my stomach trying to work it way through. That is not a good feeling. The ice cream is there too somewhere I think too…It is just very frustrating and very hard. Maybe not all vacations are the same. When I signed up for 30/10 the manager told me that she has clients who have taken their food to Paris! HA! I have been to Paris and there is no way in HELL that I would pass on ANY Parisian foods. Just not in my cards. Maybe this is another destination where it is just not in the cards. I dont know…when I think about other places I have been I can kinda “see” the differences. For instance, Disney land= easier to stay on plan. There are really no special foods there…they serve things that I can get at home. Granted burgers and ice cream are at home too. But it seems different. Germany on the other hand I would not even bring my food of attempt to follow any kind of plan. Beer is food there and green veggies are hard to come by. I just have not yet figured out a balance here…maybe there will not be one?

I weighed myself this morning and I am the exact same. We are getting in 13,000+ steps every day so far so that has been a blessing. Tomorrow not so much and once we are anchored out there will be no walking really of any kind. My parents have an elliptical on board and I can use that as much as I want. Again- where is the balance? Do I spend an hour on that contraption or watching glaciers calf into the sea? Would I miss something once-in a lifetime sweating to the oldies out here? Yes…yes I would because this is my 3rd trip up here and every trip something magical happens…something not to be repeated. Balance…balance….balance. Seems to be the key ingredient I am missing from this vacation. Maybe this will be an off-balance vacation and I will have to regroup when we return. I think that will be the case but there are 12 days left in this adventure. Thank GOD…I am not ready to go home yet 🙂