These last few days have been like waves…they roll in and roll out. One minute I am feeling great and going strong then the next I am feeling terrible and feeling weak. It is somewhat unpredictable but somewhat predictable…everything feels like a little bit of both.

Saturday- we switched our mobile service carrier and of course their “Easy” process was the OPPOSITE of that…A TOTAL pain in the ass. Our new phones came shipped with IOS 8.1.2 and of course had to be updated to 8.3 over our 5MB internet and nothing would work until that update happened. I then spend HOURS on the phone with them figuring out why my WiFi Calling feature would not enable only to figure out that the SIM card that shipped with the phone was faulty. FML. So that would mean I would need to take 2 hours out of my MONDAY to fix this problem. It was SO stressful and I could tell that this would have been one of the times that I would have made some food. I was hungry but in the past I would have made something easy and not so healthy just because I was stressed. Instead of doing that Grady and I went for a walk and remove ourselves from the stress filled atmosphere. After out walk my sister and her future husband join us and we all visited with my grandparents….had a lovely Happy Hour on their back patio just visiting and laughing. We then left to make dinner which was another adventure…we have 5 propane tanks at the Canal…do you think any of them were FULL? So after borrowing Grandpas tank and sleuthing out a semi full one the steak were done and the food was READY! My sister and I made ALL the food for dinner that night…marinated flank steak, mashed cauliflower, garlic green beans, and roasted peppers with red onion. The ENTIRE meal was on plan- even the marinade- and it was DELICIOUS! It was really a typical meal for us; normally the mashed thing would have been potato and perhaps we would have had some bread. But really it was a typical meal that tasted no different that what is usually does and it was FILLING. We took all the food back to my grandparents and dined with them which is always a treat. Hilarious stories and MEMORIAL READY one-liners always seem to come out of dinners with just the grandparents. Example: We were talking about how things had changed since their younger years and grandpa pipes up and says “You know what has changed? The meat market!” Grandpa almost laughed his wine out of his nose and we were all DYING. I don’t know if she realized how we took it but man it was hilarious. Then we all transitioned the party inside for a few hundred rounds of SPOONS! My sister eagle clawed a spoon out of grandpas soviet ear grip more than a few times and grandma kept ending up with 5 cards. Again…HILARIOUS. So at MIDNIGHT we finally parted ways and went to bed. But during the game playing grandpa paused for dessert in which I was loaded with  my own on-plan treat. I was not even hungry thought and it did not taste as good as it smelled. Everyone else enjoyed some ice cream and cookies but it did not bother me…I was FULL and anything did not sound appealing to me at that point.

Sunday: I woke up FULL from dinner the night before which NEVER happens. Usually I wake up and I am STARVING. Maria assured me that that was what was supposed to happen…I was not supposed to wake up famished. She made us a lovely breakfast of scrambled egg whites with asparagus, spinach, feta cheese, onion and garlic and again…it was DELICIOUS! Grady’s family then joined us a few hours later for lunch which was again- 100% on plan for me! I found some chicken sausages that are 100% on plan and we BBQ them with some brauts. We made a cucumber side as well as some Kale chips which really saved the day. That meal was a hard one. Usually when BBQing dogs or brauts they are enjoyed on a bun with may and cheese…with watermelon and chips. But none of that was available to me that day. It makes you miss the old BBQs…its one of those wave action moments on this journey. Even though there is nothing different in the company or conversation or fell…something is different because the normal food is not there. Everyone enjoyed the food…but it just felt off. We played with a little visitor for another hour or so and it was time for them to go. Maria had been crock potting a new chicken taco recipe all day and it was time to dine again by 7pm. She shredded the chicken into butter lettuce leaves and we could wrap them like a taco! 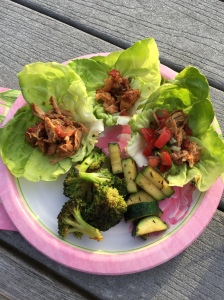 But holy shit that was hard…I was missing the sour cream and the cheese. Again- they tasted AWESOME…just amazing…but something was missing. Even Grady made a comment about how hard this was…even he was missing something. When other people eat on-plan with me it does make it a bit earlier. Then everyone is missing something and everyone knows what this feels like. And for me it is really nice to know that everything being served is on-plan…no need to worry about what secret ingredient is lurking in the dish.  Week One was hard just because it was new and I was still trying to figure things out. Week Two has been hard because I have a much better understanding of the plan and really understand what is off the table for a while. It seems like the cravings for specific things are worse this week than last…which was what I was told would happen.

Monday: Back at the lake…just me because Grady is back at work. I have a TON to do today so I get started early and find that it is 10:30 before take a break for breakfast. I was a little hungry when I got up but I was REALLY hungry by 10:30. I made my provided breakfast of eggs which were ok but they did not really satisfy. I think next week I am going back to cereal. That seemed to just taste better. These are the REALLY hard times for me…when its just me working and I am hungry. All I can think about is eating anything that will help me feel full and there is tempting stuff everywhere in this house!!! Tonight we DEEP dive and throw away all the shit that is tempting me off of my PLAN! But I had an on-plan lunch and we will have on on-plan meal tonight. I just have to stay on plan…

This is going to be an interesting weigh in. I ate on plan 5/7 days…the two days at the canal was all on-plan food but it was “home cooked”. I did not have huge portions but I know the 30/10 food is precise…I mean down to the nitty gritty for calories, carbs, fats, sugars…all that good stuff. If I didn’t lose or lost a little then I know that I just have to stick to the plan exactly as it was designed. I am hoping that is not the case because I did enjoy cooking and eating healthy foods with family. So Thursday is already making me nervous.

I still do not feel any different. Some days I have a ton of energy and some days I don’t. Some days my cravings for certain foods while we are eating certain foods is almost unbearable and sometimes its not. It’s just like waves crashing on the beach…they come and go sometimes without pattern or sense and sometimes they crash with a familiar rhythm. In some ways I also feel like this week was more of a struggle because I am beginning to understand just how much I am missing certain foods and I worry that I will never be able to enjoy them again. But I just have to remind myself that those thoughts are my addiction and not my own rational thoughts and that I just have to get to the place where I can look back and try to understand what I was so worried about in the first place. 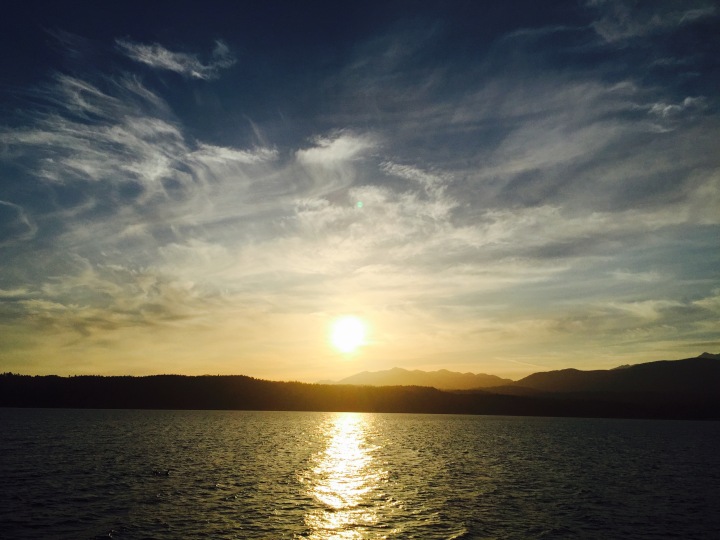 I hate these questions..."Tell me about yourself!" Well...yesterday I made a killer brunch for my family...kayaked with my nephew...and hot tubbed with the hub after doing some laundry. So yeah...I am also an online teacher in a public school, run my own educational consulting business, earned my Masters in Education through Central Washington University, and practice yoga on the daily. Oh...I also work with new/novice/struggling teachers. I like to read historical fiction. I LOVE the water...swimming in it...boating on it...looking at it from docks...you know...that kind of stuff.